Can you imagine a better context to open your mind to this land of philosophy and culture?

One of our spiritual leaders (Yogi) will be with you during the visit to reveal the magic of the place!

Our experienced Yogi will guide you through your spiritual journey.

Other pages about Ladakh
On this page


Places like these on our planet, naturally take our minds to another state of consciousness and calm our restlessness. This is what makes the Himalayas so magical. Not only the Himalayas but also the northern parts of this chain which extend over the Tibetan plateau and of which Ladakh is a part are a sight to behold

It is for this reason that the Himalayas are portrayed as the cradle of Hinduism and Buddhism. Ladakh is an important refuge for the Tibetan Buddhist Community.
Most visitors go to see Buddhist monasteries to appreciate their architecture, the beauty of their frescoes and statues or simply to enjoy the very special and peaceful atmosphere that emanates from them.
With Himalayan Ecotourism, it is also possible to spend time there, to participate in certain rituals such as morning prayers, and even to receive gifts in the form of teachings.

This is what makes Himalayan Ecotourism special. You not only see the culture but get to experience it.

Spiritual Dayney in Ladakh does not stop at just Buddhism. You can learn the traditional forms of meditation techniques like Vipassana.

Even before Buddhism, the inhabitants of Ladakh practiced an animist and shamanic cult. The Shamans still exist in Ladakh and we invite you to meet them.

It should also be noted that there persists a tradition to care for the plants and minerals. This knowledge is transmitted from one generation to another in the families of the Amchi.

Mystical Monasteries - Come and witness the grandeur and simplicity all at once at the Buddhist Monasteries of Ladakh. You will be one step closer to witnessing how the monks live their lives and how they achieve a sense of calm despite everything going around in the world.

Luring Landscapes - Ladakh is unlike any other mountainous region in India. Its uniquely weathered mountains, roads with a 360-degree view, an unbelievable night sky and the ever-so-warm people of the villages make the place worthy of the title of ‘Heaven on Earth’.

Charismatic Culture - Although Buddhism is the dominantly practiced religion in this particular region, it warmly invites people from all backgrounds and religious identities. When you interact with the people of Ladakh, you will come to realise that it is not religion that binds people, but their warmth and hospitality.

Himalayan Ecotourism invites you to experience the spirituality of ladakh.

Schedule of fixed departures for 2023 .

Over the past two millennia, Ladakh has had a long history of invasions and migrations.
Both Muslim and Buddhist influences have therefore shaped the culture and architecture of Ladakh. Despite this, since the Namgyal dynasty, which still exists today in Ladakh, Tibetan Buddhism remains the dominant spiritual tradition..

Since Tibet suffered the Chinese invasion, Ladakh is known as the "little Tibet of India." This is a territory where the local population can freely practice their traditions.

Each monastery in Ladakh is a teaching center of Buddhism for monks. Establishments have even been created for education that is easily accessible to all, especially to the foreigners. You must therefore speak English to take the lessons, but if this is not the case, our English-speaking guide can help you with communication.

If you are interested in the philosophy of Tibetan Buddhism, and want to learn the essentials directly from the sages and monks of Ladakh, we will organize your trip centered on the teaching of Buddhism in the company of a Lama. 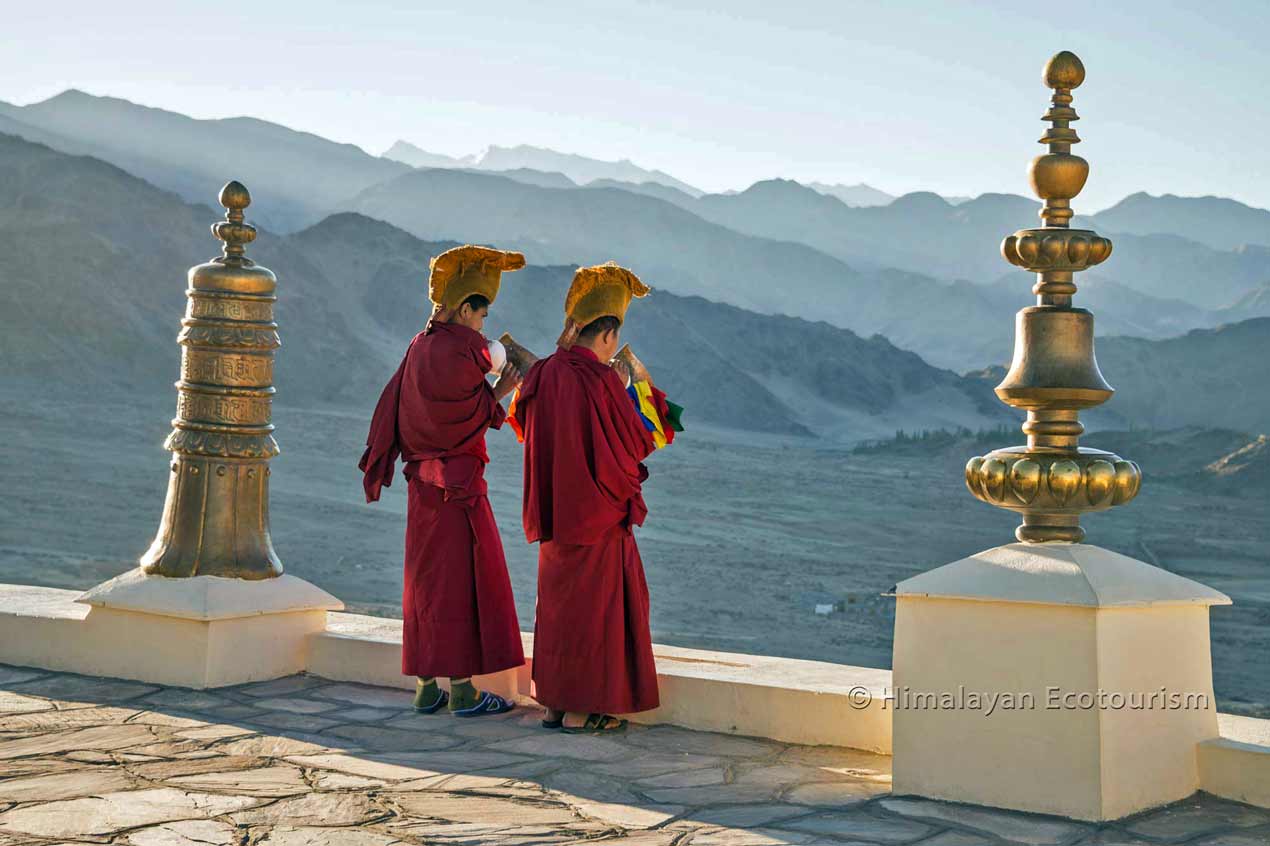 Meditation and Yoga in Ladakh 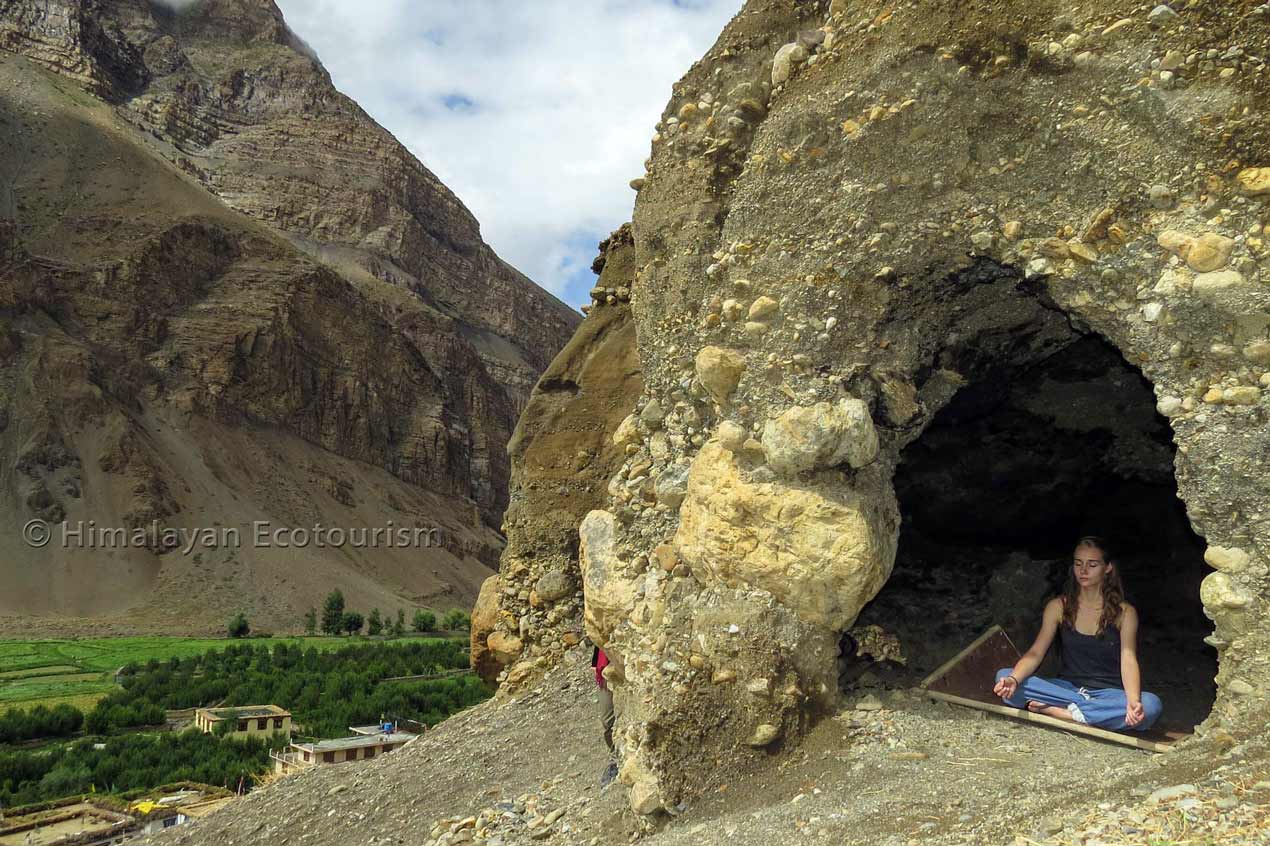 Monasteries, meditation centers and other places in Ladakh provide the perfect atmosphere.


Meditation is a practice where an individual or a group of individuals uses a technique to train their mind and achieve a higher level of mental and emotional stability, and a deeper sense of calm.
Reaching such a state of mind feels amazing, because your mind attains high consciousness enabling you to develope a better perspective and understanding of the world. Your thoughts becomes more lucid.

Meditation has always been an important aspect of Tibetan Buddhism as the mind is used as an instrument to explore the mystery of the unconscious mind and enrich the understanding of life and death.

You can take advantage of your stay in Ladakh to learn and practice meditation and yoga.

It can be part of a spiritual Dayney in Ladakh or just a once-in-a-lifetime experience at a chosen location on a classic tour.

Let us know what you would like as an experience and we will curate your trip to Ladakh for you.

Shamanism is a form of spirituality that emerges from animist communities. All over the world, the communities whose survival depends on natural resources and those which have not been influenced by a dominant religion, draw their inspiration from the elements of nature.

Members of these communities feel an intimate connection with “animated” nature, and so they seek to establish a relationship with the spirits that animate nature.

Within these communities, the Shaman acts as a medium to communicate with nature. He connects with spirits and natural energies by altering his state of consciousness. He or she, as is the case in Ladakh, uses this connection for healing, or for other purposes such as predicting future events or solving social problems.

Shamanism has a considerable presence in Ladakh. Although it is independent of Buddhism, the Shamans have borrowed some Buddhist traditions to survive religious influences often hostile to shamanic practices.

Interestingly, the shamans of Ladakh are women. They are called Lhamo.

If you are interested in shamanism, we can arrange your shamanic session with a Lhamo, or even focus your entire trip on the shamanic experience.
Contact-us so that we can organize an amazing experience for you! 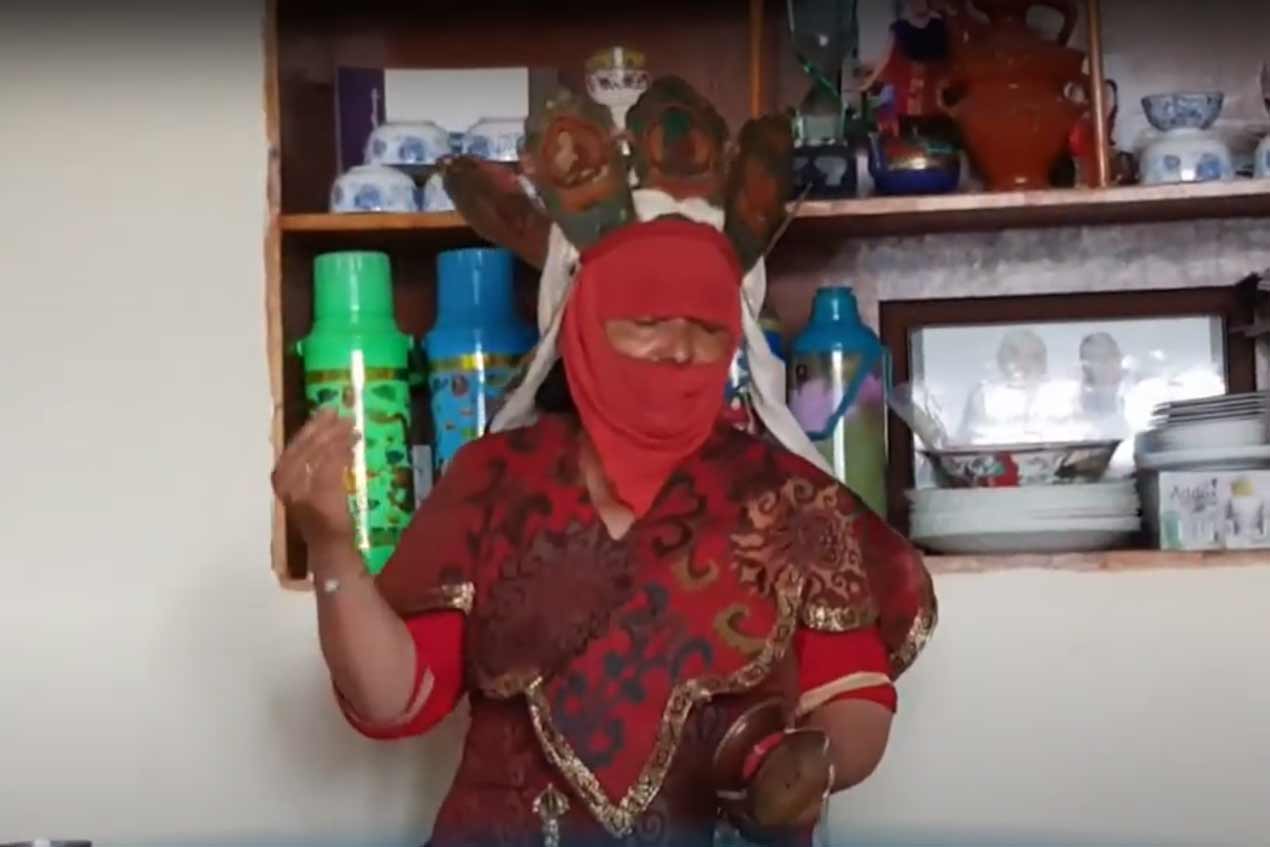 A Lhamo in Ladakh

According to recent research, Shamanism has been regaining popularity in Ladakh. 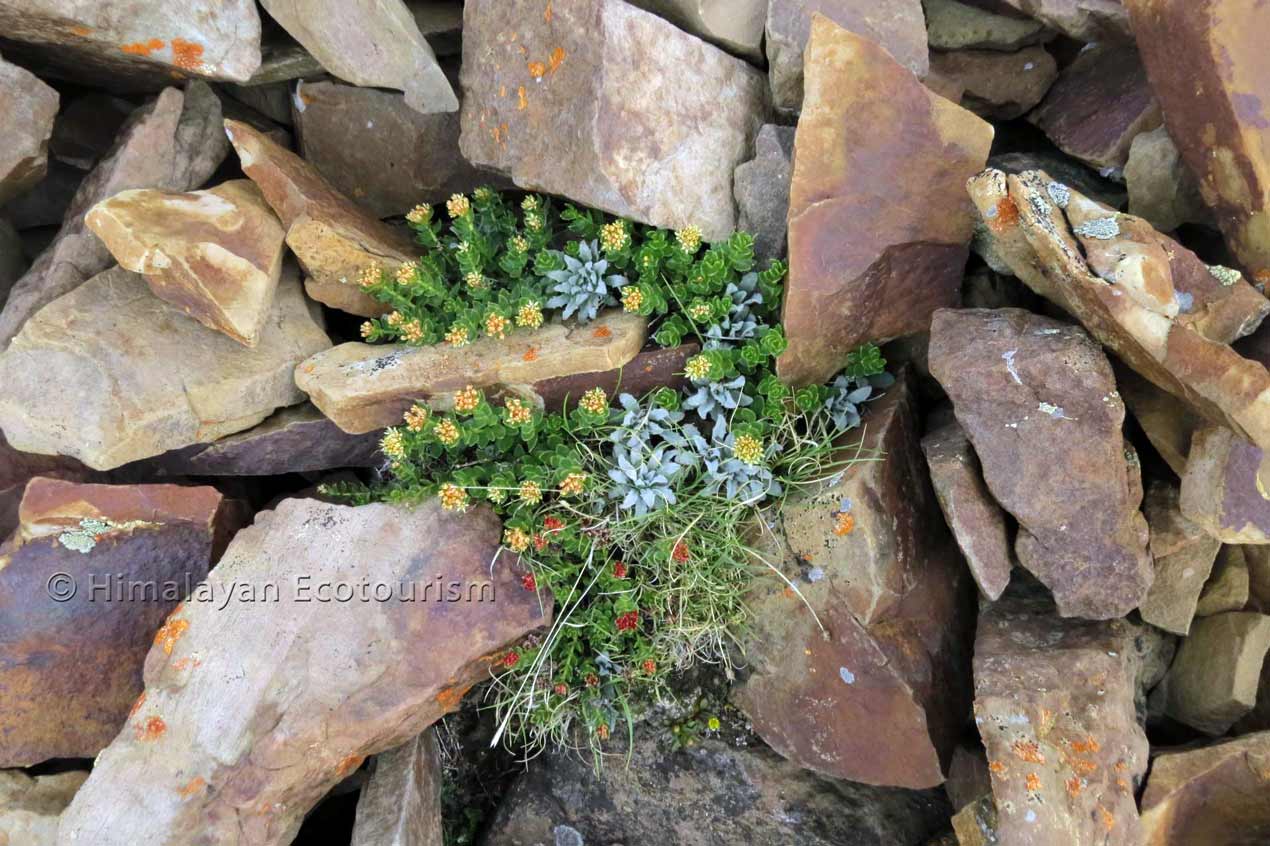 A real science based on the knowledge of minerals and medicinal plants.

The traditional Tibetan doctors are called the Amchi. Many villagers are still cared for today by the Amchi. Ladakh is a land where traditions are still very much alive!

You can come to Ladakh with us and meet an Amchi who will share some of his knowledge with you.

What do you think of a walk in the Himalayas with an Amchi in search of medicinal plants?

Interested ? Let us know what experience you are seeking.


In search of spiritual places

Ladakh has many places that are considered sacred because a special energy emanates from them.

Geographically, they are passes, lakes, mountains, particular rock formations or even natural caves.
It can even be a legendary place, for example a place where a saint meditated and found spiritual awakening.

These places are often marked by the locals as important, by building chortens, stupas, monasteries, or simply by placing engraved stones and prayer flags there.

Do you want to discover energy hotspots in Ladakh?
Contact-us, we will arrange it for you! 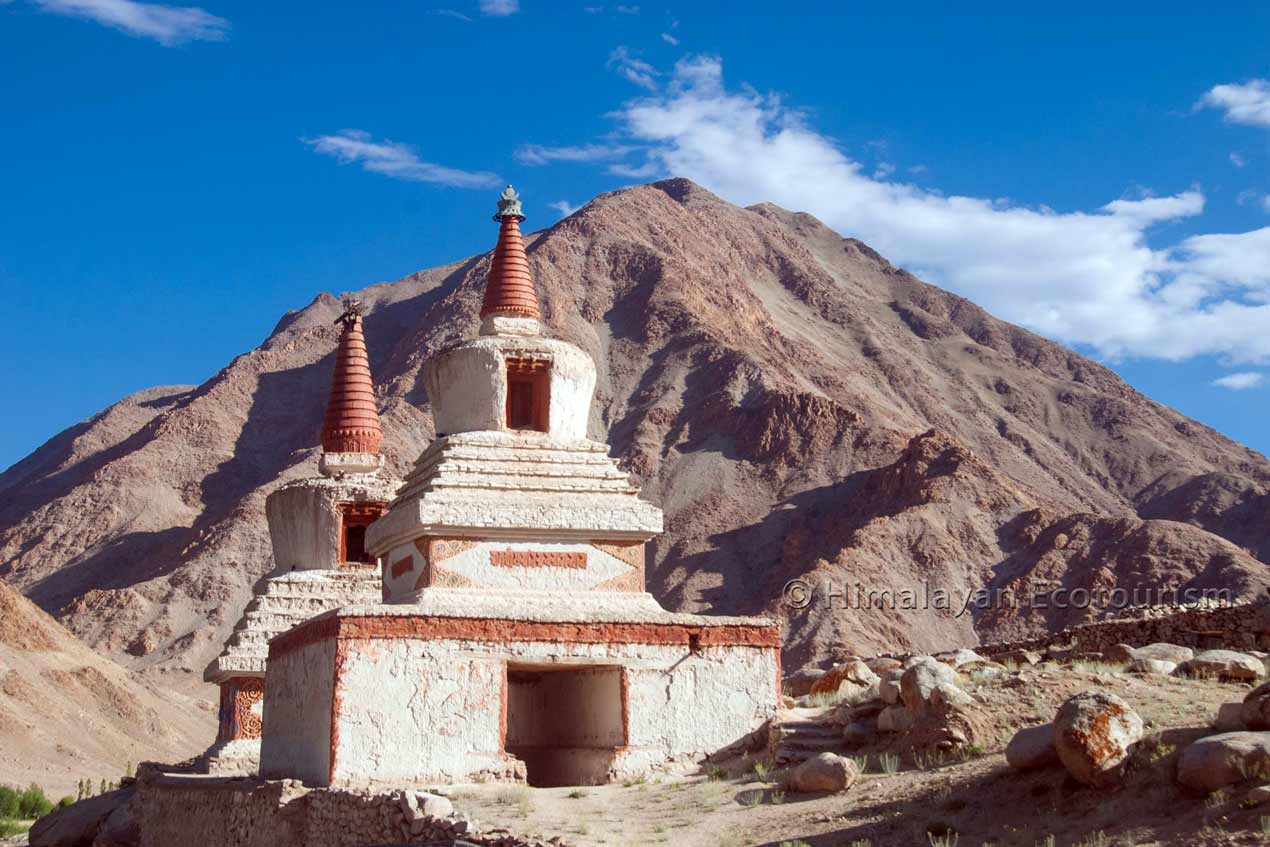 The magic of Ladakh

Ladakh is full of incredible places that for a millennia have been known for their positive energy vibes.

Itinerary of a spiritual Journey in Ladakh

Himalayan Ecotourism offers you to travel to Ladakh to discover the spirituality of Ladakh which has a striking resemblance to the spirituality of Tibet. The itinerary that is presented below offers a very varied experience of Ladakhi philosophy and spirituality, with super interesting encounters with a Lhamo, an Amchi, a Yogi and monks in a monastery.

For all our "spirituality" oriented trips, you are accompanied by one of our French/English-speaking Ladakhi or Tibetan guides who specializes in providing these experiences.

We understand that your area of interest might be more specific. For example, you might be interested in Buddhist teachings in a monastery, or in shamanic healing. In this case, you simply need to let us know by contacting us by email or telephone. Sonam, our local expert and Stephan will ensure that the trip is organized according to your expectations. 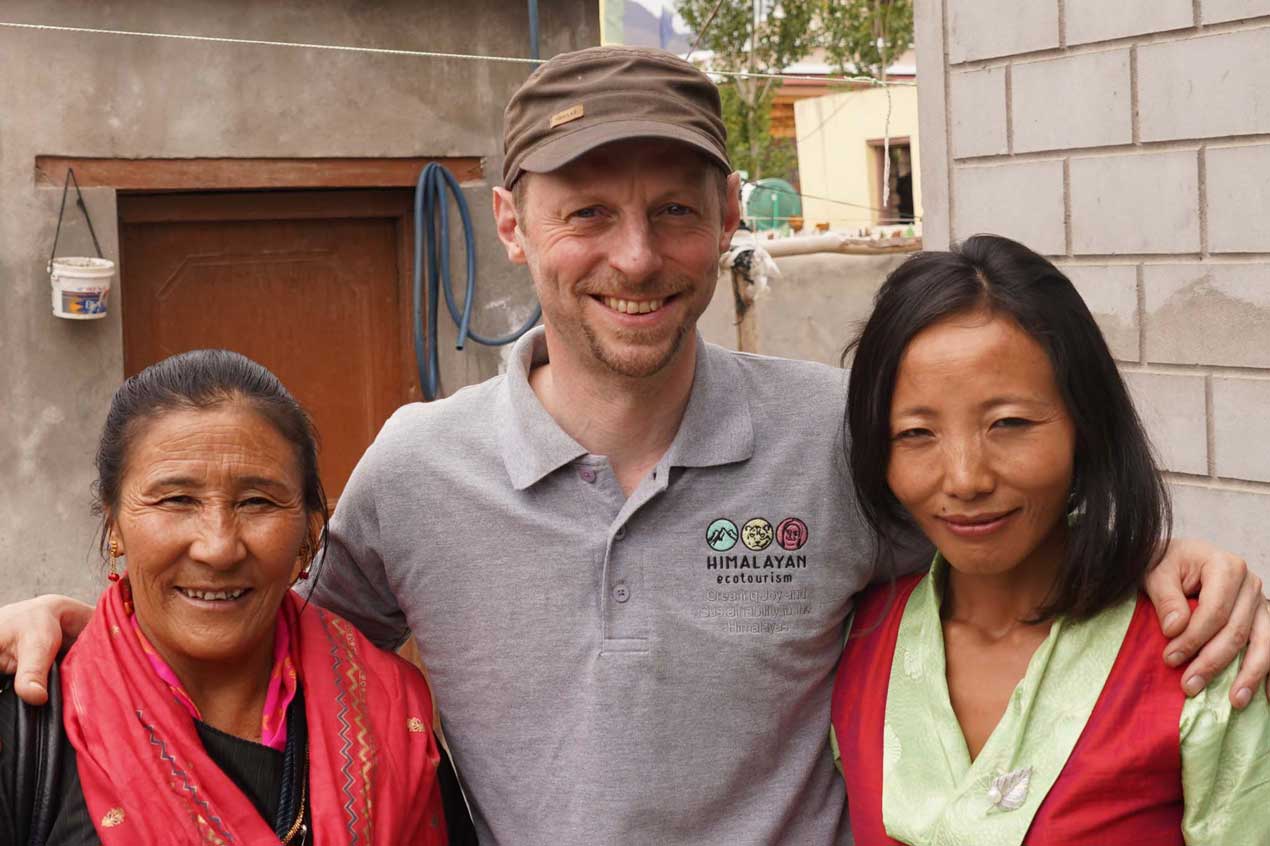 
An itinerary of 16 days


Himalayan Ecotourism is a social enterprise that uses the opportunities offered by tourism to invest in actions aimed at :

Helping the local community with economic development and ensuring the preservation of pristine environment,
The emancipation of women from rural Himalayas,
Improving the education for children,
Regeneration of degraded ecosystems (through reforestation)

For you, traveling with Himalayan Ecotourism means that :

You can offset your carbon emissions by supporting our reforestation program,
You provide the locals an opportunity to earn and raise their standard of living by working with us,
You encourage a better tourism for tomorrow, one that is responsible and sustainable. 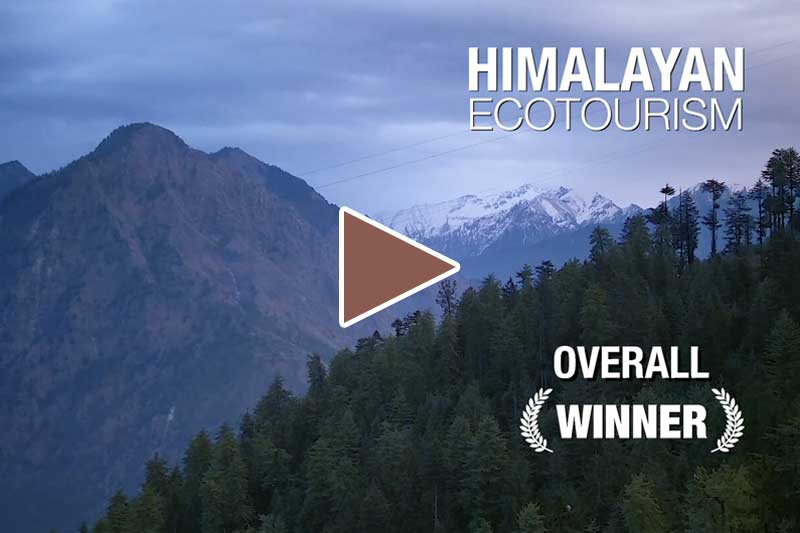 Responsible in the true sense!

Many international organizations have come to check our work on the ground before awarding us prizes in the field of sustainable and responsible tourism.
So you are sure to travel with the right organization.
You will find here the various awards that we have received.

Himalayan Ecotourism is the winner of the To Do award 2022 in the field of "Socially Responsible Tourism".
We are also the Overall Winner of the Indian Responsible Tourism Award 2019 and the Gold winner in the Best Adventure Operator category.
We have been declared winner of the Sustainable Tourism Award 2019 by Skal International and Biosphere.
Our cooperative-based model of social enterprise and our efforts to conserve the Himalayas are the main reasons for winning these awards.
Thank you to all our cooperative members, our customers, our friends and well-wishers !